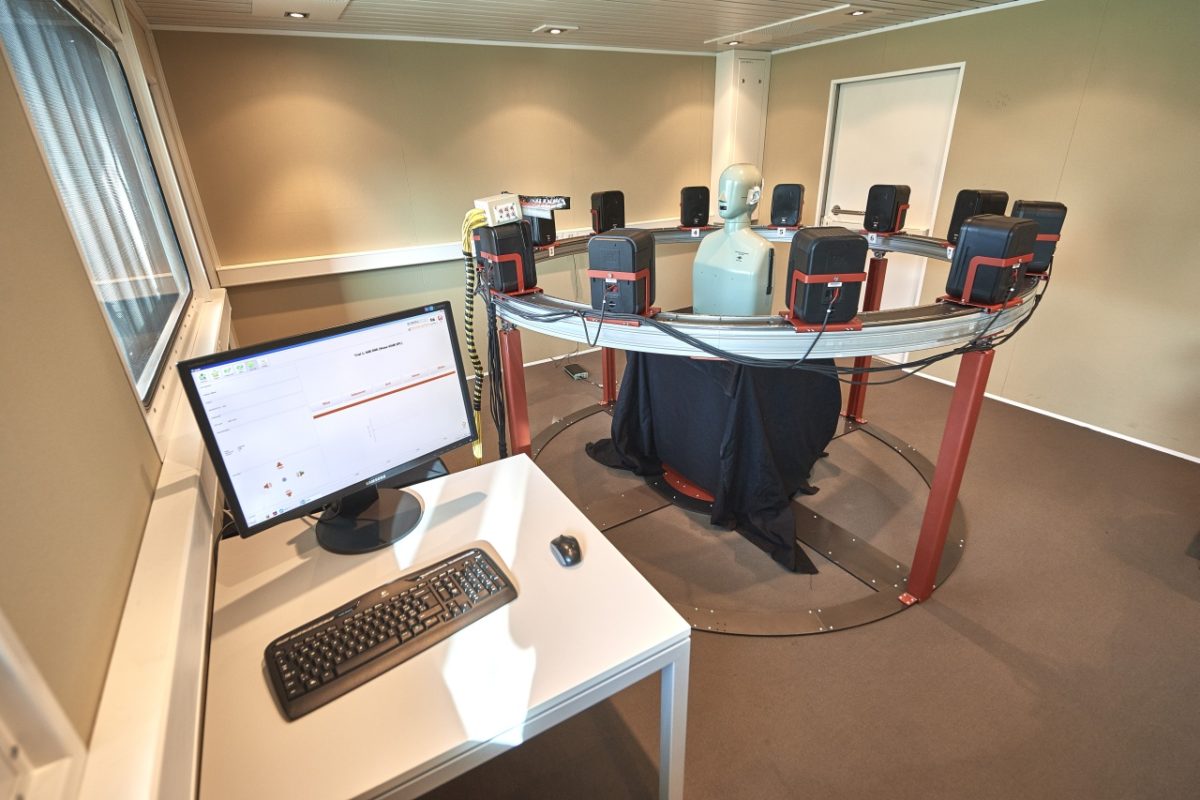 This is another project I did as a part of my civil service. The following requirements had to be met:

The reason behind this project: (Text mostly from W.Wimmer)

Since its integration in 2011, the audiology laboratory of the ARTORG/Inselspital has extensively been used for clinical research projects. The laboratory equipment has been applied in more than 10 clinical studies. In addition, the test system has been used to answer specific questions in clinical cases (e.g. sound localization ability, speech intelligibility in noise).

Over the last years, the system software and hardware has constantly been extended. A miniature speaker array for minimum audible angle measurements and control software were added. Furthermore, the number of simultaneously usable channels was increased to 4, allowing for speech intelligibility in multi noise experiments. However, as new research questions appear, the current test system is reaching its limits. One example is the evaluation of complex signal processing algorithms (e.g., adaptive beam formers) in modern hearing aids or implant audio processors.

The existing laboratory is located in the ARTORG Center (Room C 208-3) within an audiometry chamber (6.0 x 4.1 x 2.2 m3). The chamber was certified for audiological testing in November 2012 (Diatec AG certificate No. HPK-A04 059). The audiological test equipment consists of a multi speaker setup with 12 speakers for sound field measurements and a miniature speaker array for localization tasks.

A custom-developed software is used to control the test setup. The software can be used to conduct the tests and automatically generates reports for archiving. The following tests/experiments are currently implemented:

Figure 3 shows a rendering of the intended multi speaker setup upgrade. The concept is separated in 3 expansion levels, which are based on eachother. 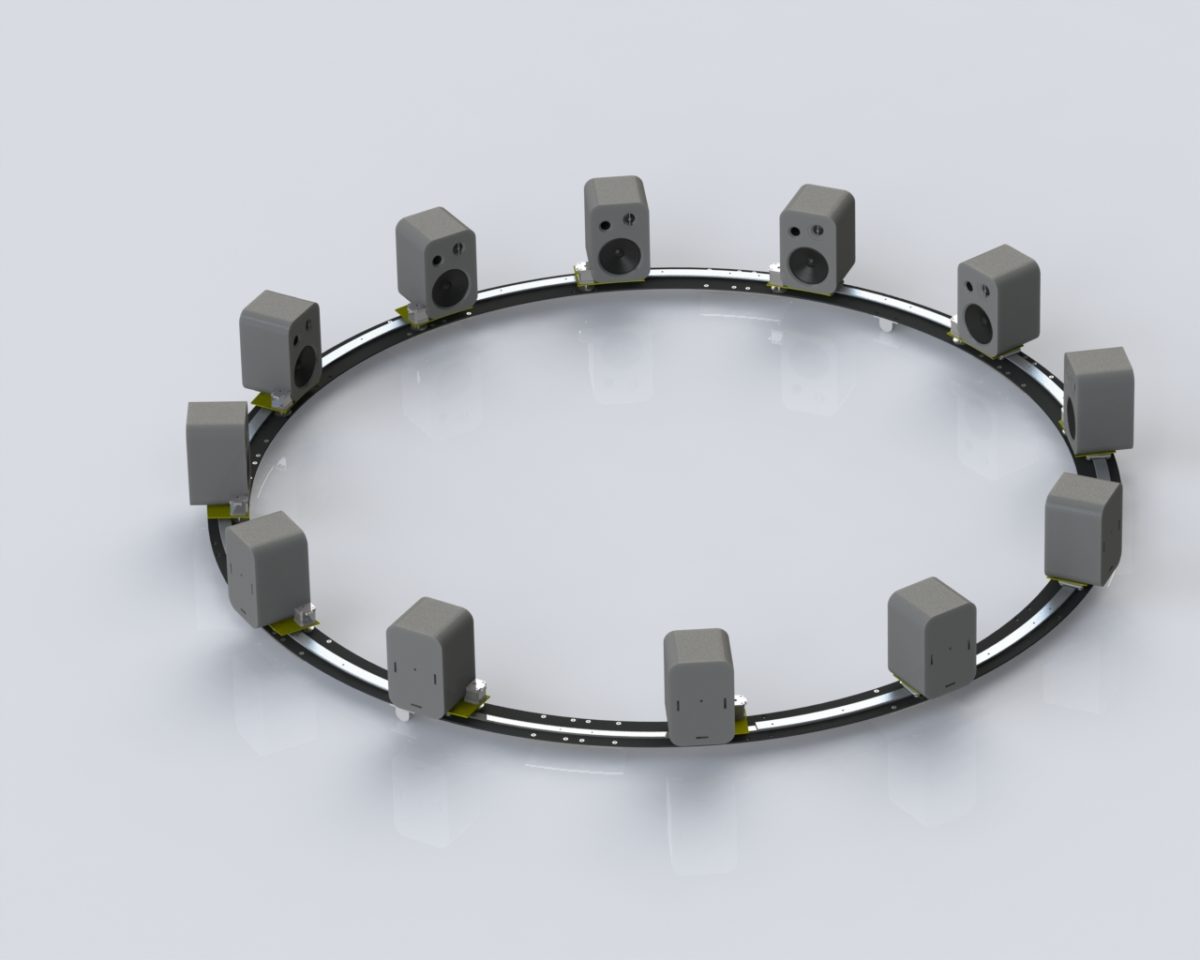 The first expansion level covers the production of a solid support ring with rails. On the ring, the 12 speakers are placed on slides allowing to position the speakers in arbitrary configurations at defined points. The whole ring can be pivoted to let the subjects enter the center of the ring, but also to allow measurements in the median plane. In addition, a ground plate with a grid is produced to enable for an exact positioning of the subjects or test/calibration equipment. 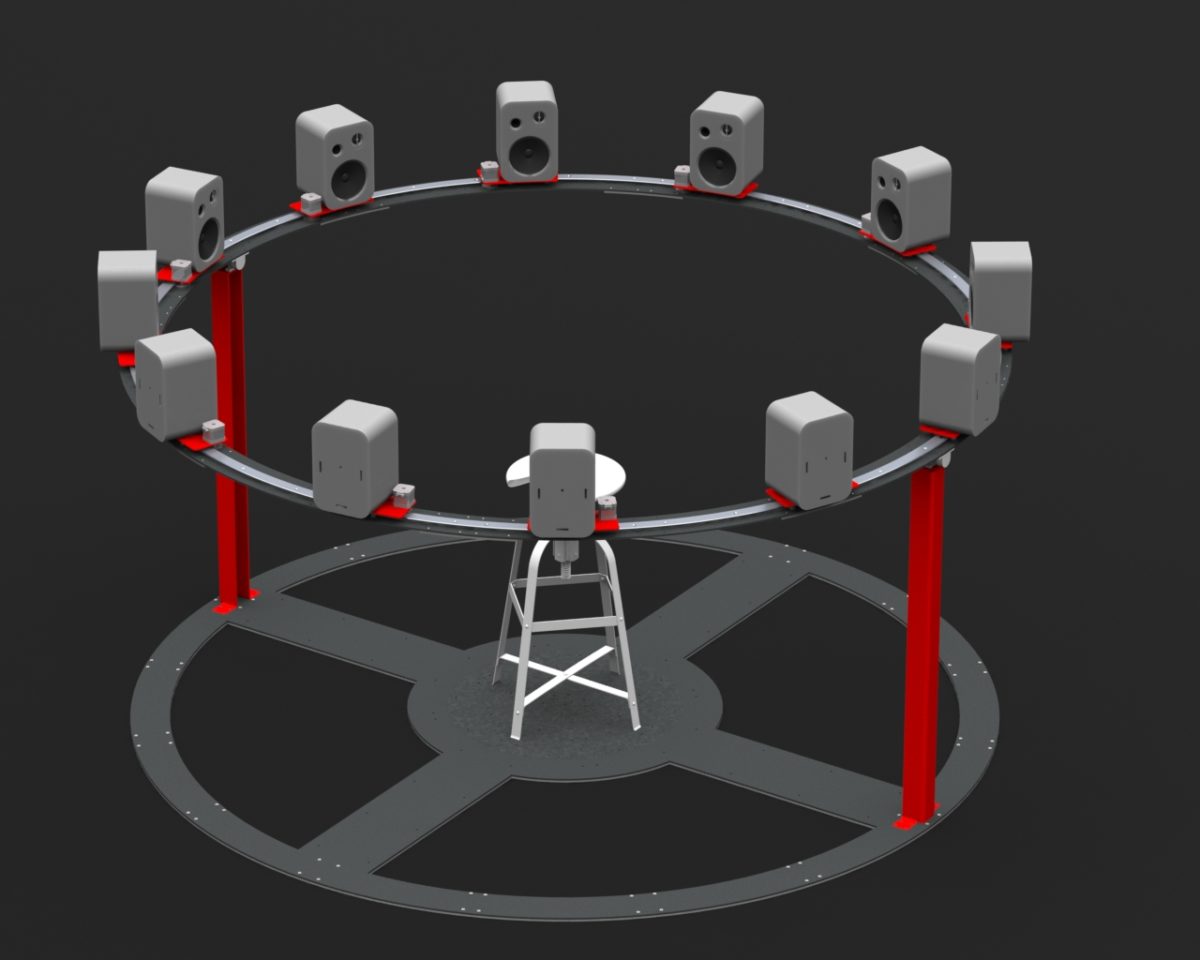 The second expansion stage is intended to increase the number of simultaneously usable audio channels from 4 to 16 (12 for the loud speakers and 4 spare channels). To gain this number of channels, new hardware components have to be purchased and installed.

The third expansion stage will enable for an automatic positioning of the loud speakers on the rail. The slides with the speakers can be moved using step motors. The mechanics are designed to produce low noise during movement. This stage includes the installation of step motors, drivers and control units as well as the development of a dedicated control software. The control is intended to be implemented via a wireless connection (e.g. Bluetooth). In addition an external subject control device (e.g. tablet) will be included to allow for direct feedback of the tested subjects during the tests.

Benefits and advantages of the new system

After a full extension, the setup will allow for dynamic audiological tests and experiments. The system has the following advantages:

The following experiments/tests can be envisioned:

The static analysis showed quickly that the rig from the figure above wouldn’t be stable enough. 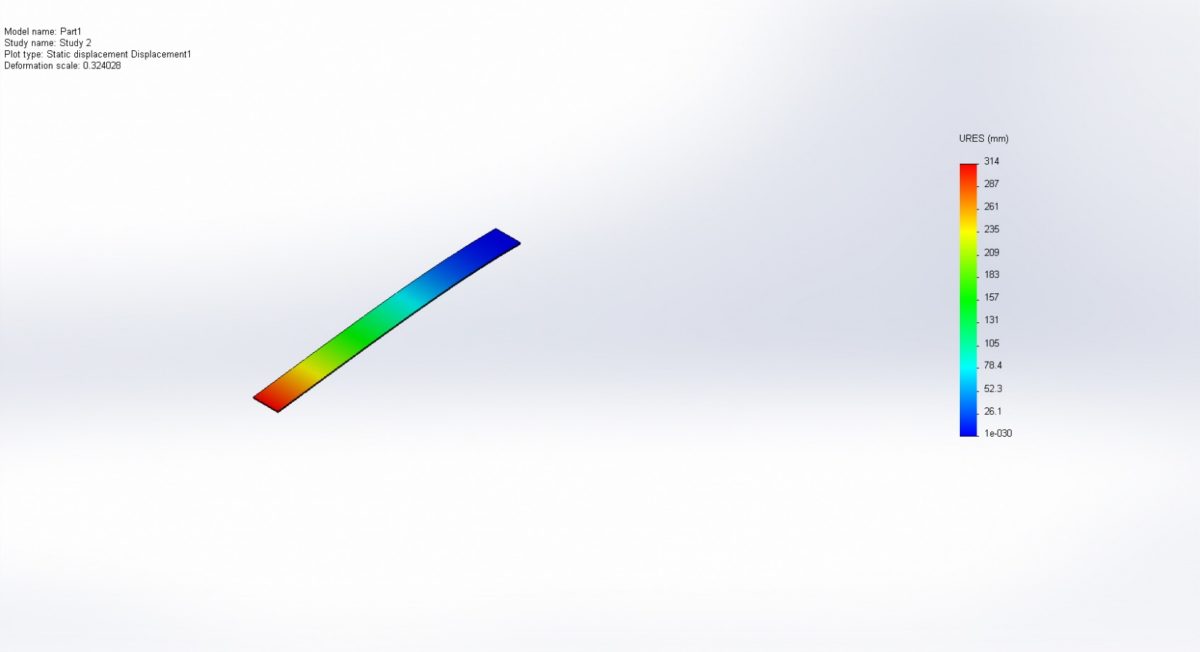 Therefore a better support structure had to be taken into consideration. In the end the decision was made to use a custom bent aluminium structure to support the rails. The analysis showed that the maximum displacement if only held by the bolts on the two pivot points would be less than two millimeters. To simplify the simulation it was done with straight aluminium structures and only from one side. So the end product would will be even more stable than the simulation assumed. 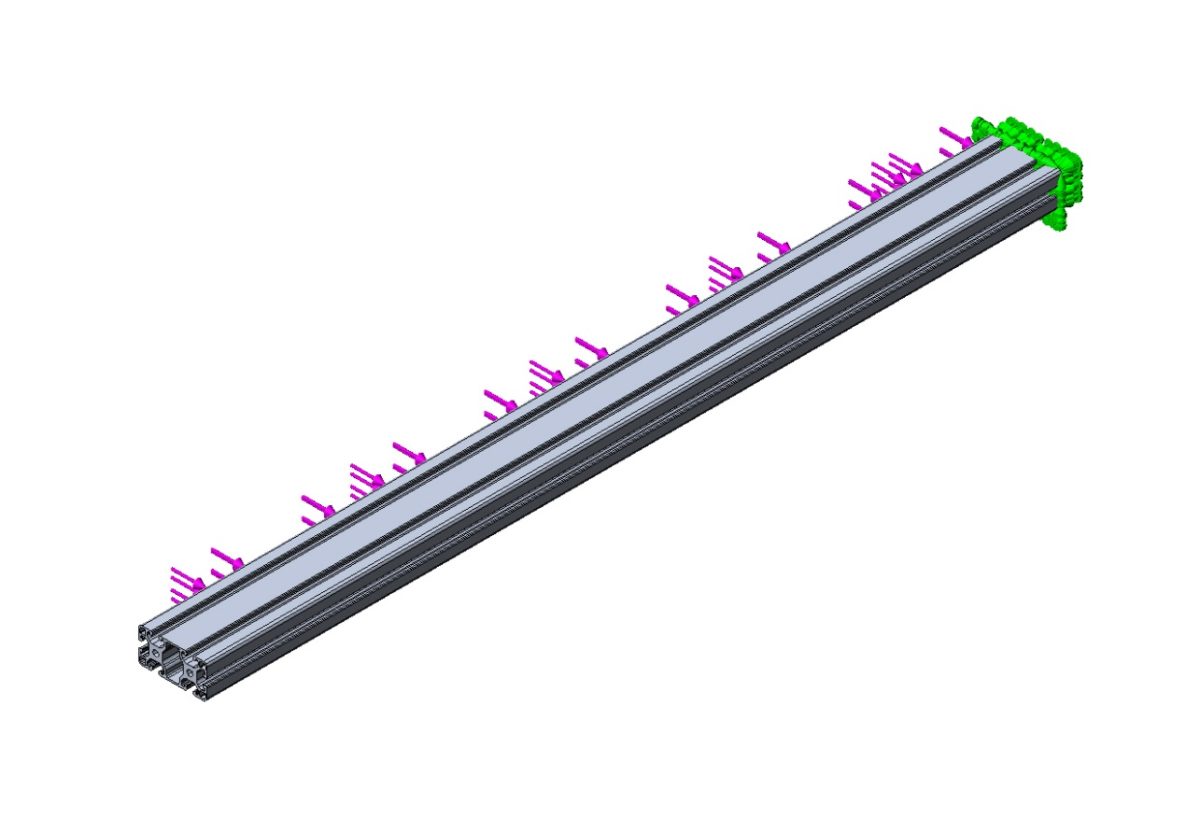 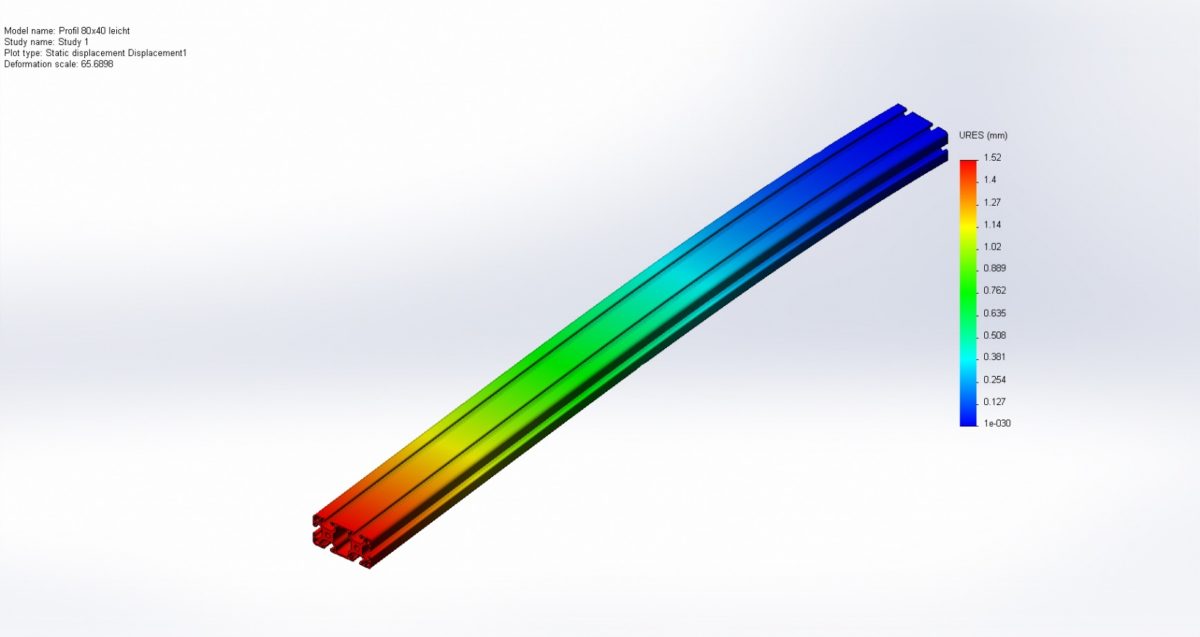 The following figure shows the design of the final system. We later ran into some problems with the design but nothing that couldn’t be solved. But more on that later. The aluminium support structure is fixed on four legs. Two legs can be removed so that the whole ring can be pivoted in order to make measurements in the median plane. 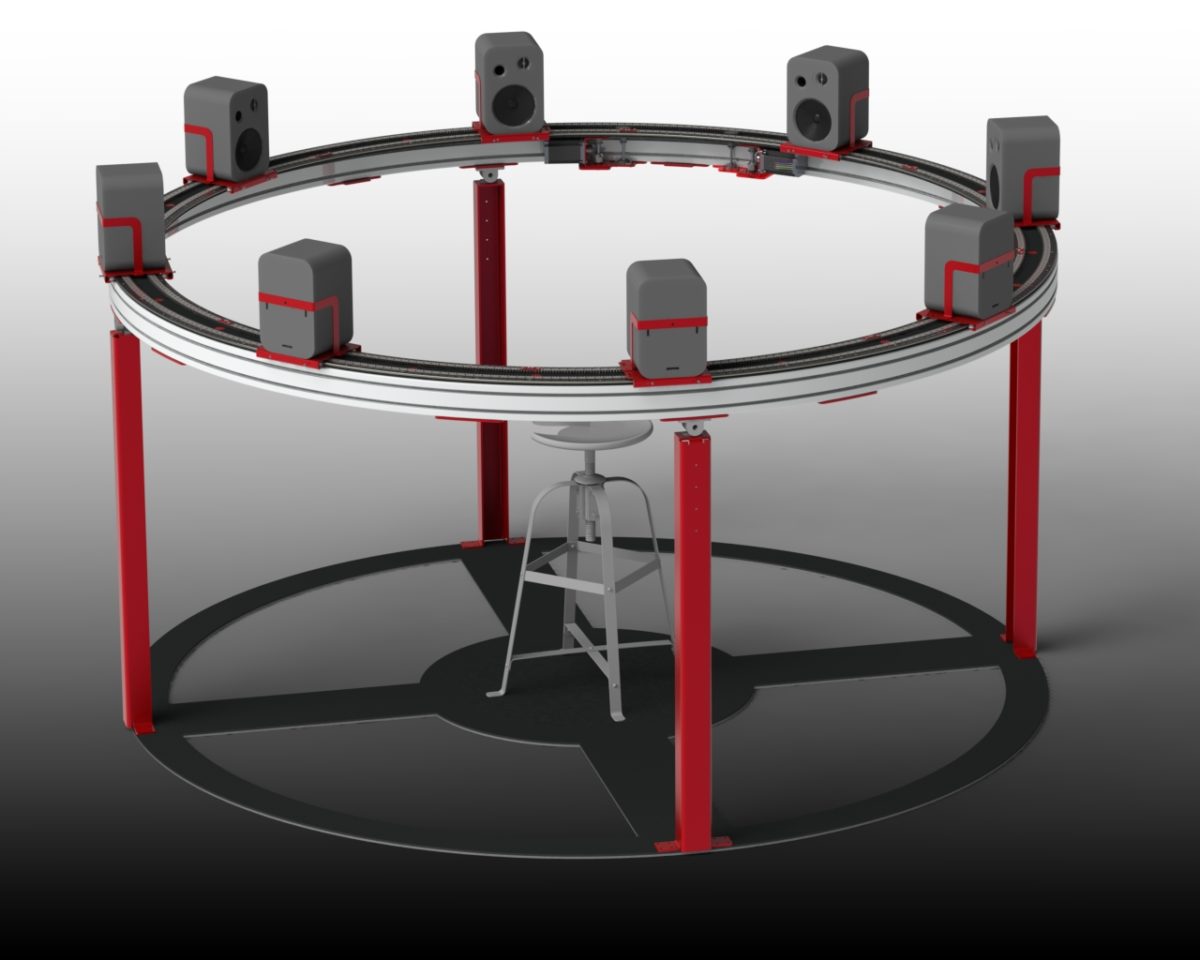 Each loudspeaker is mounted on a low profile wagon with four u-bearings that keep it on the rail. 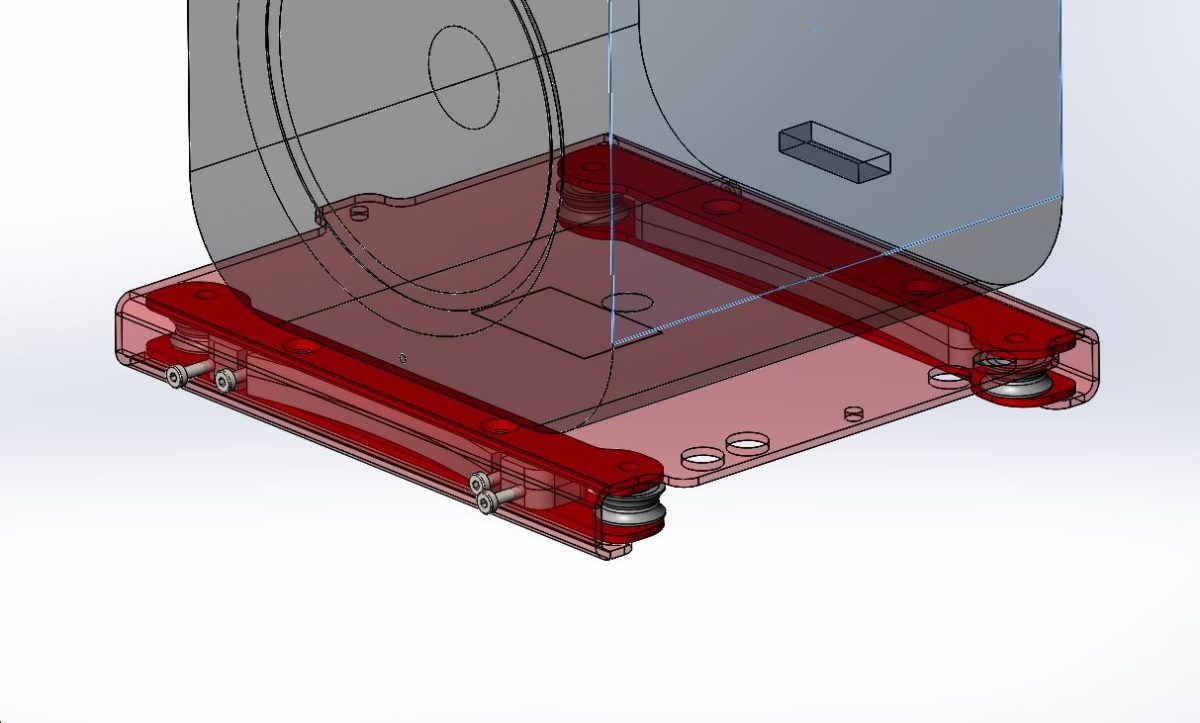 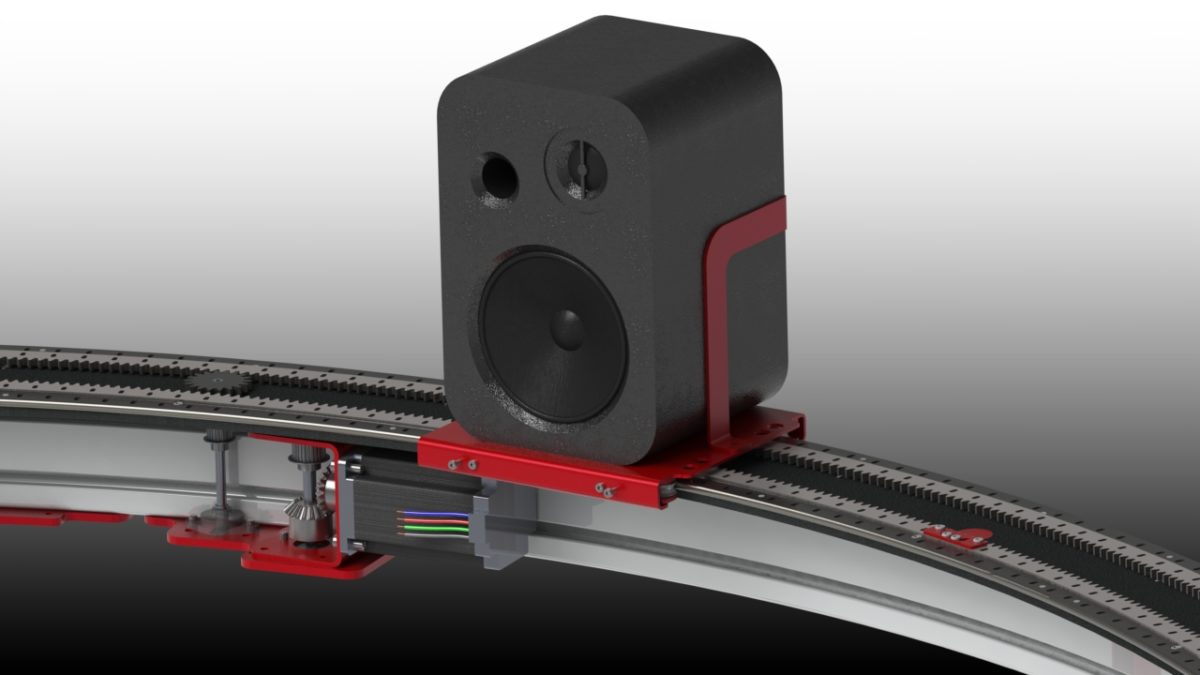 After we were finally confident with the design, we had to bring the design from paper into reality. Since my time there was absolutely limited (From the start of the design to building the rig I only had around two months.) I quickly began to order all the parts. Most mechanical parts like bearings came from china. The sheet metal parts as well as the aluminium support structure were ordered in Switzerland. I could still get access to the powder coating machine of my former workplace. In a two-day session we painted all the parts and soon after started to assemble the rig. 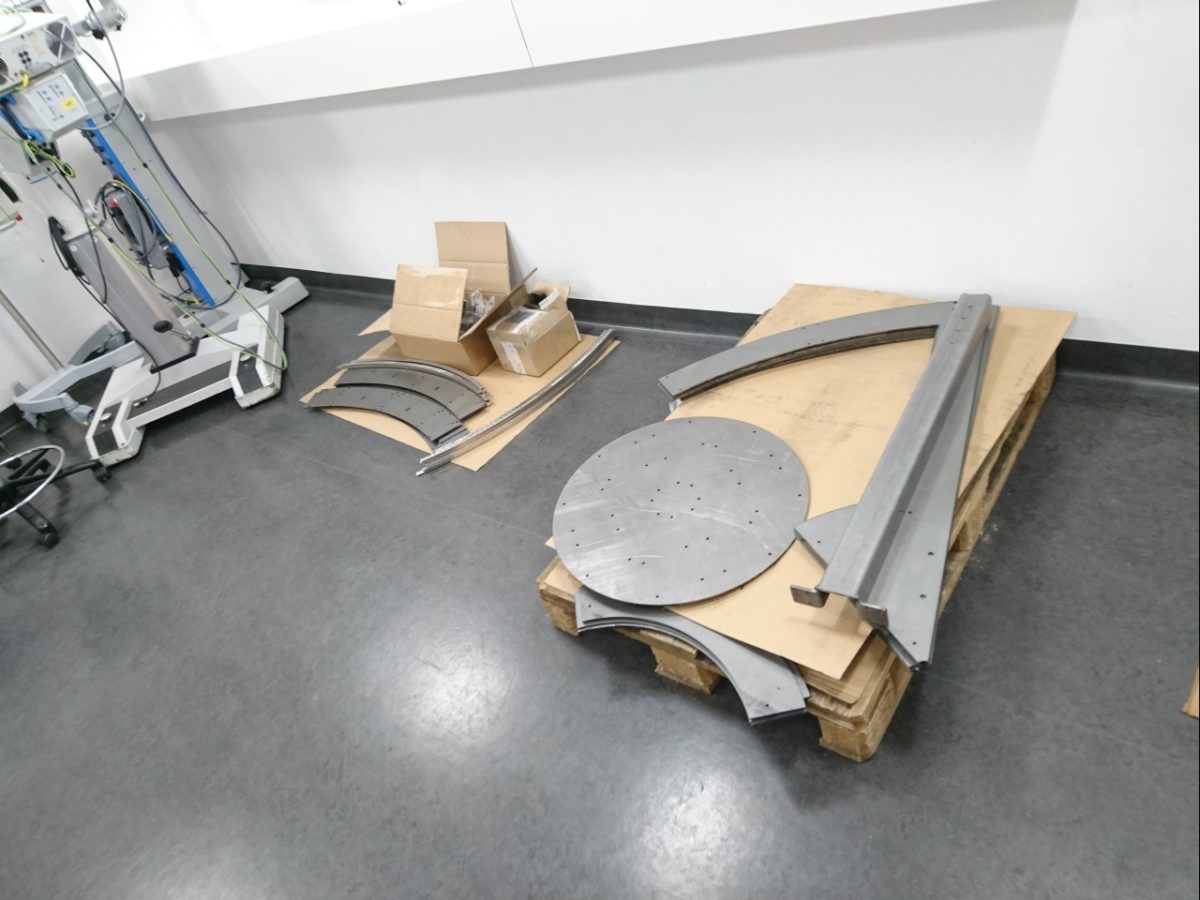 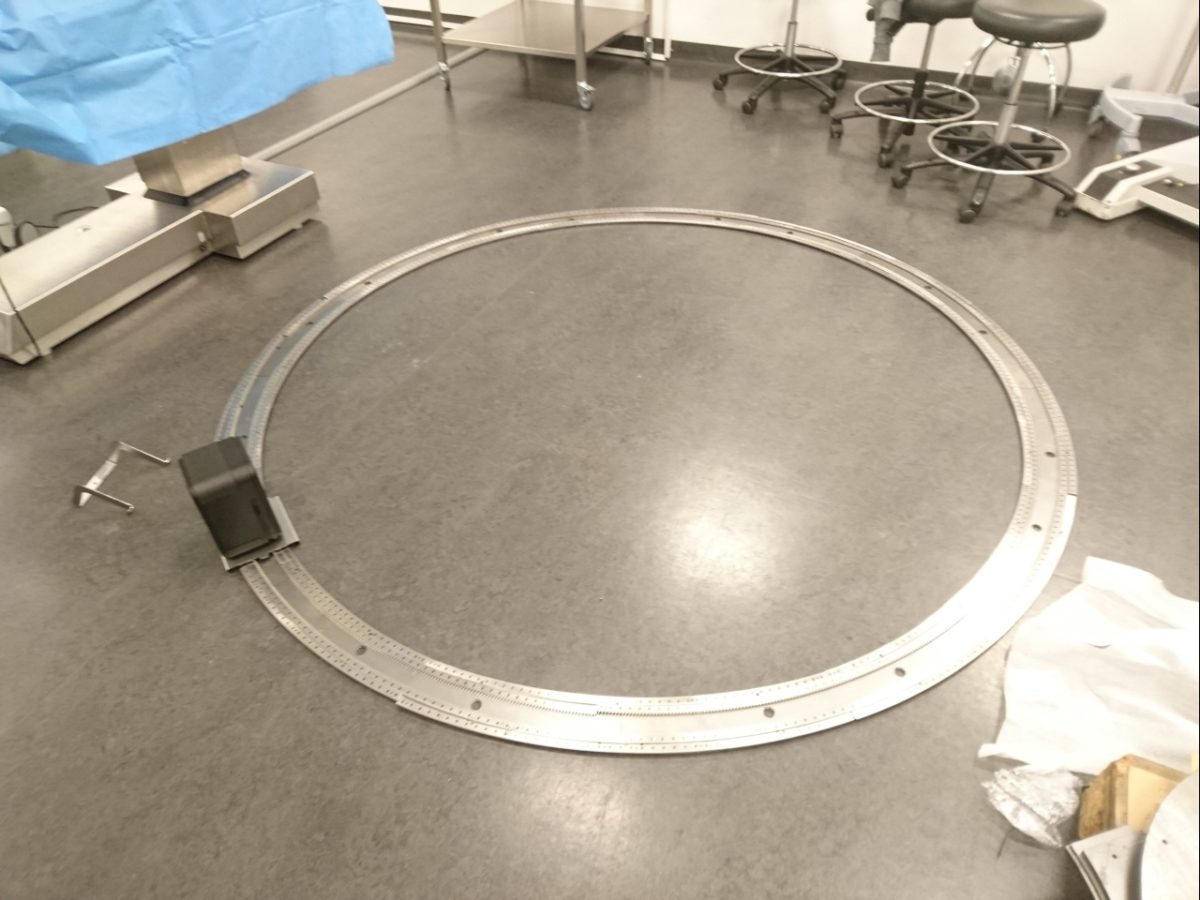 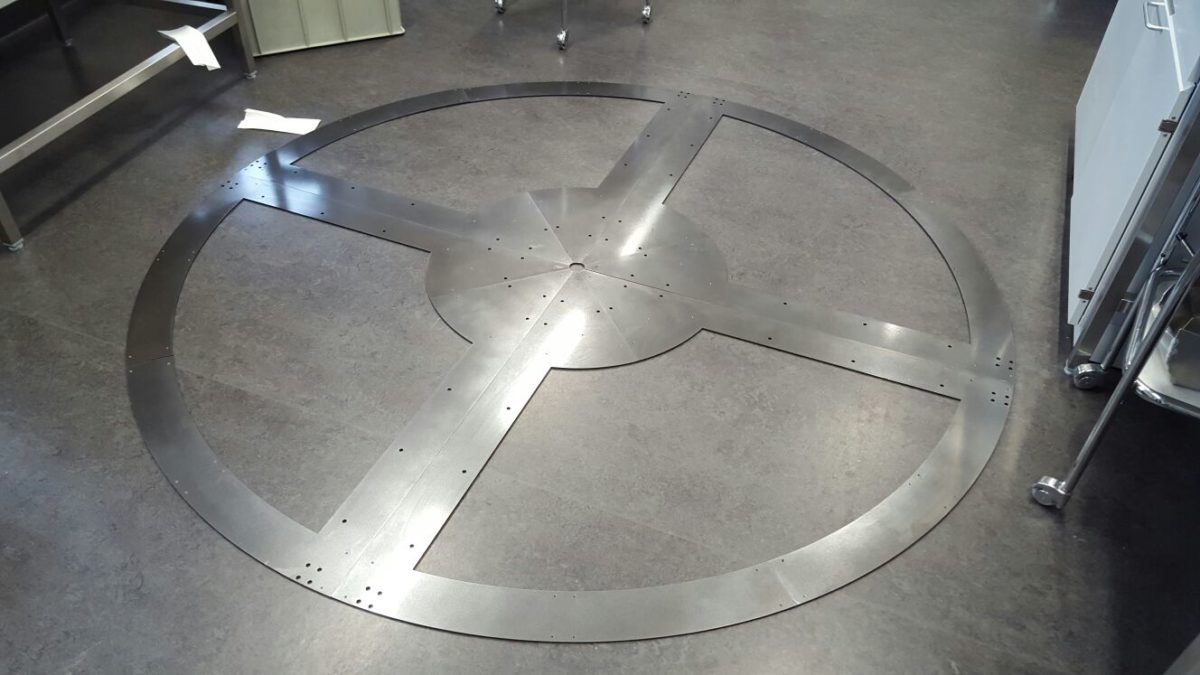 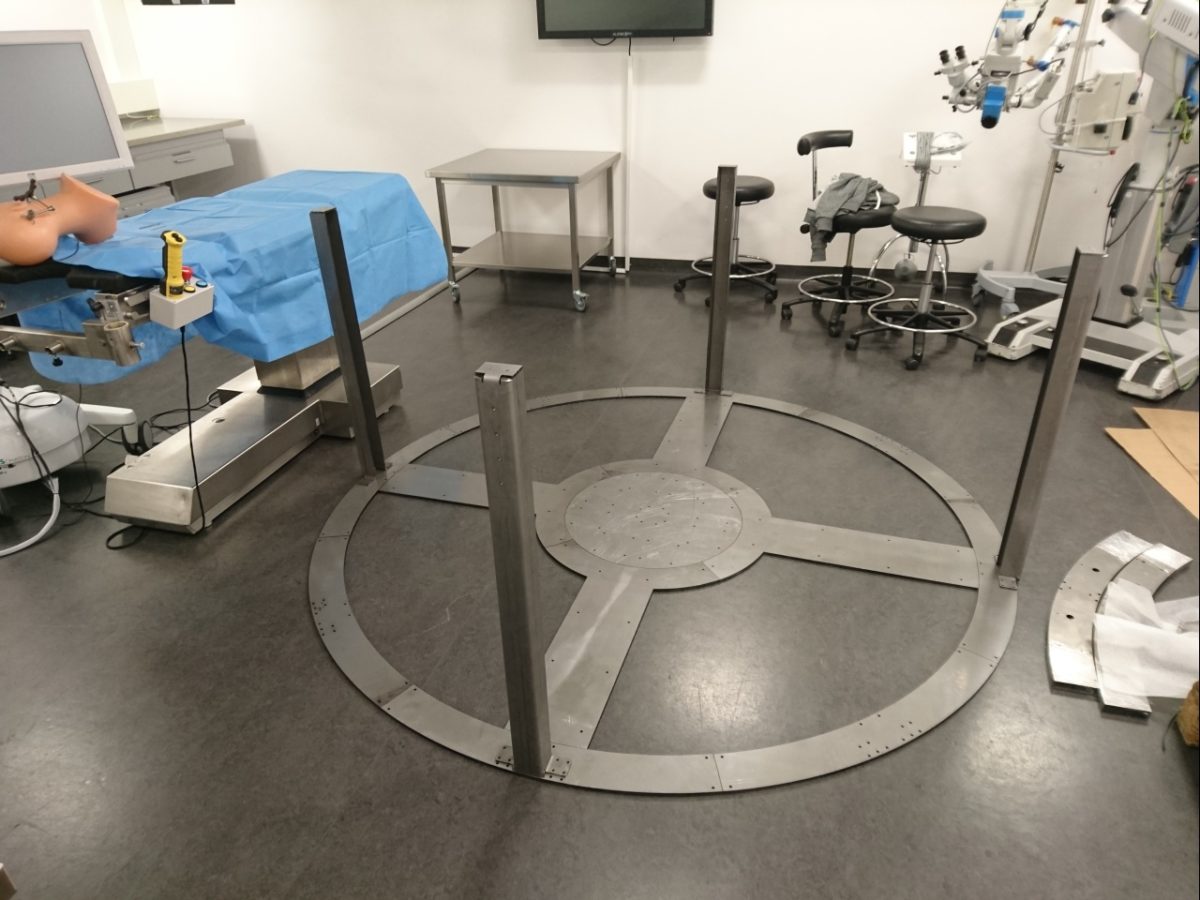 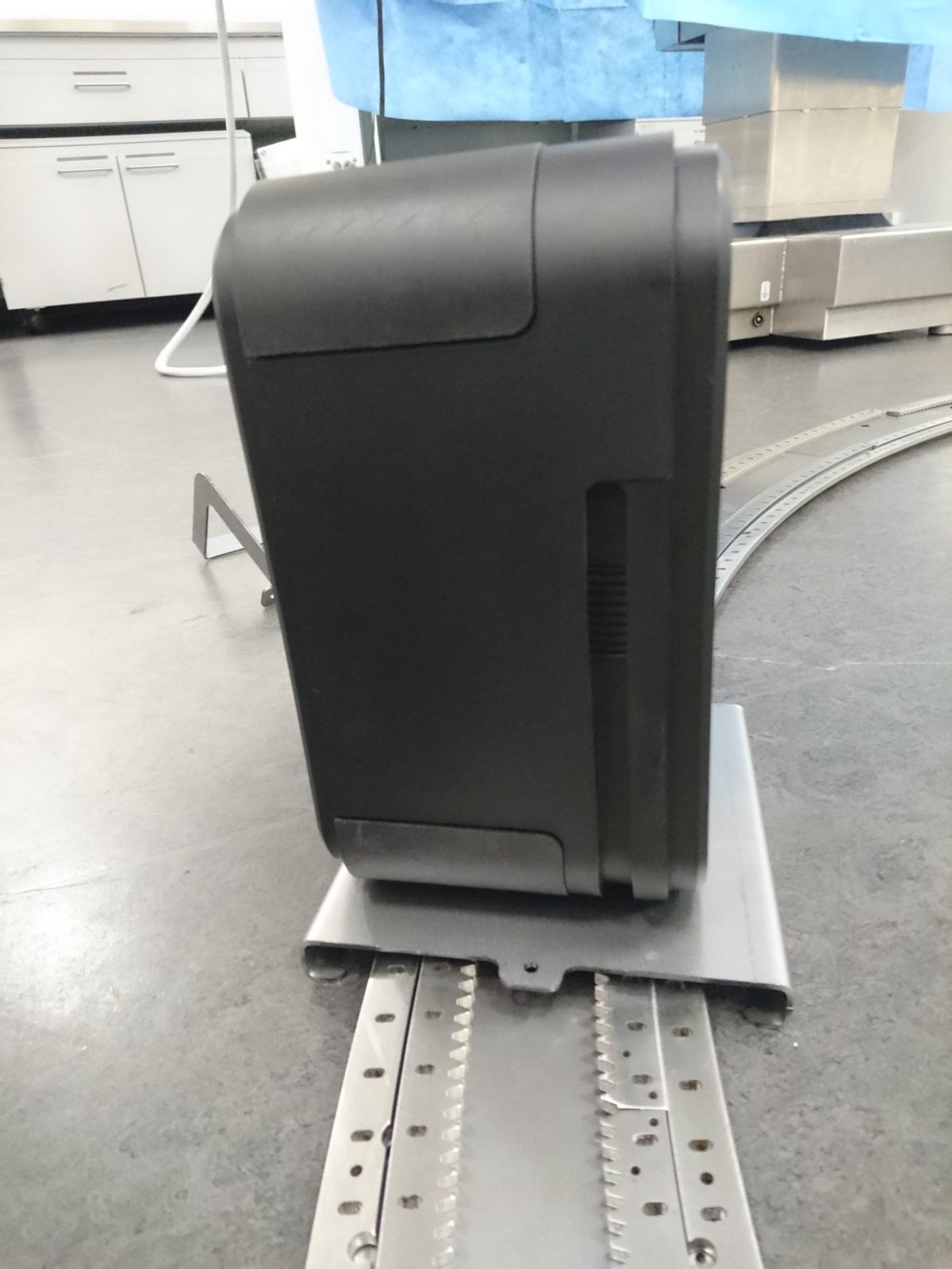 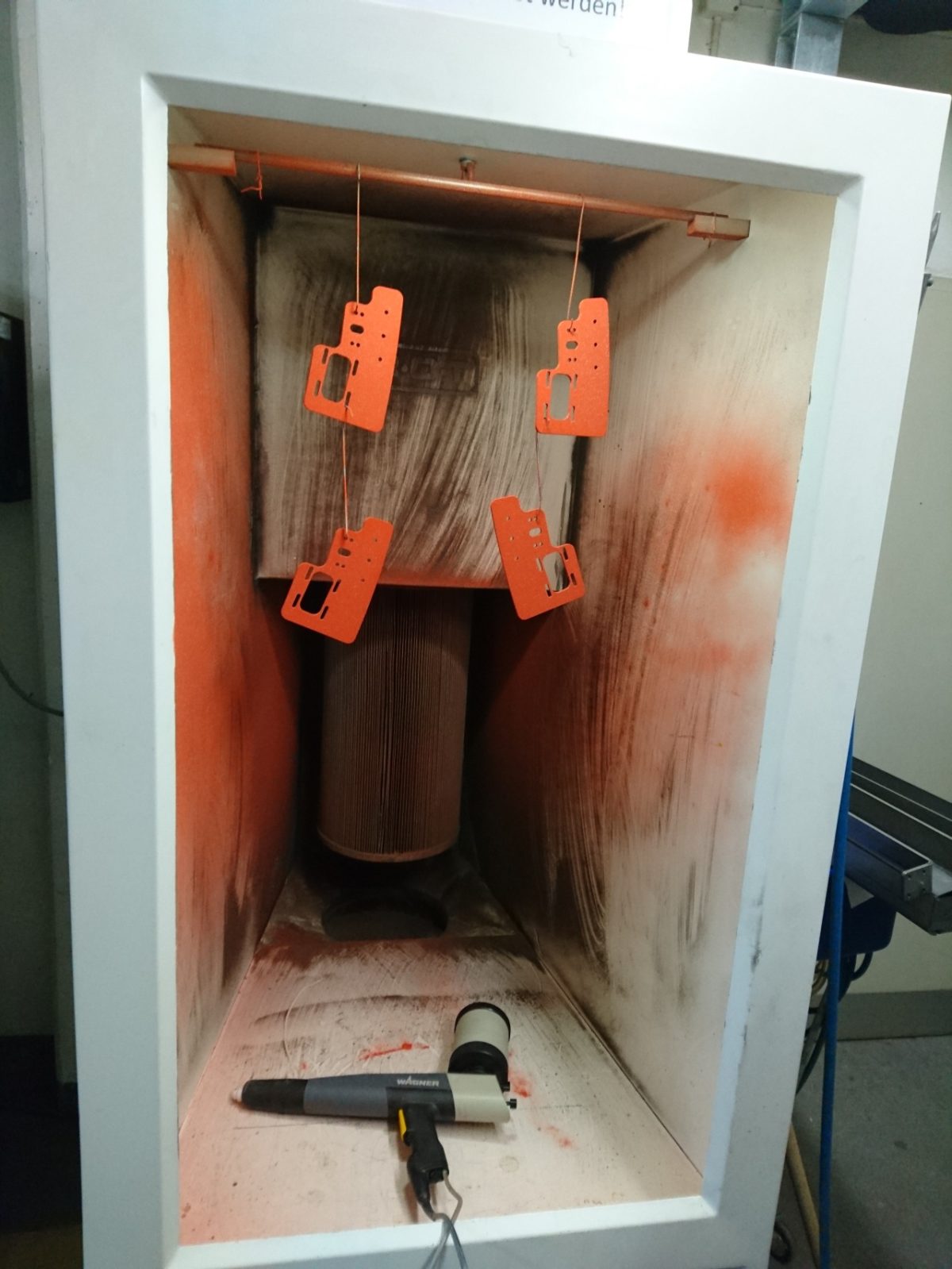 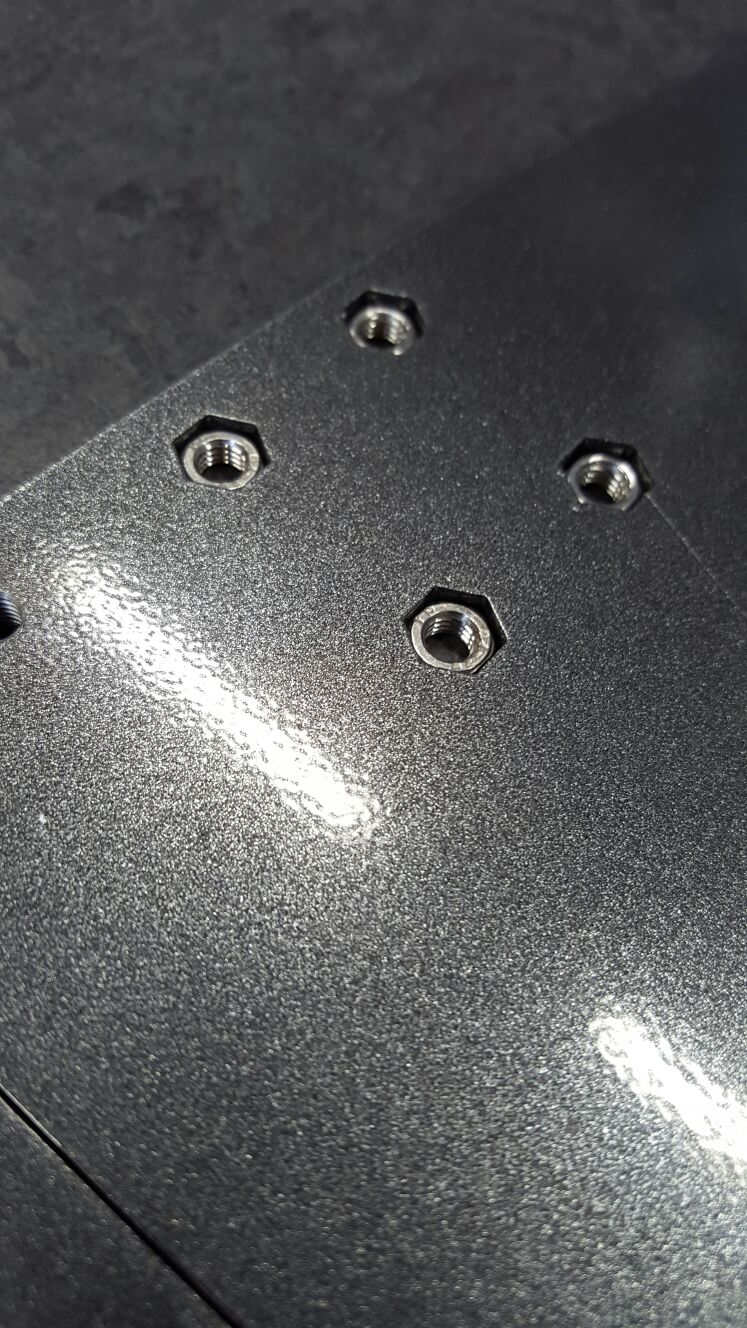 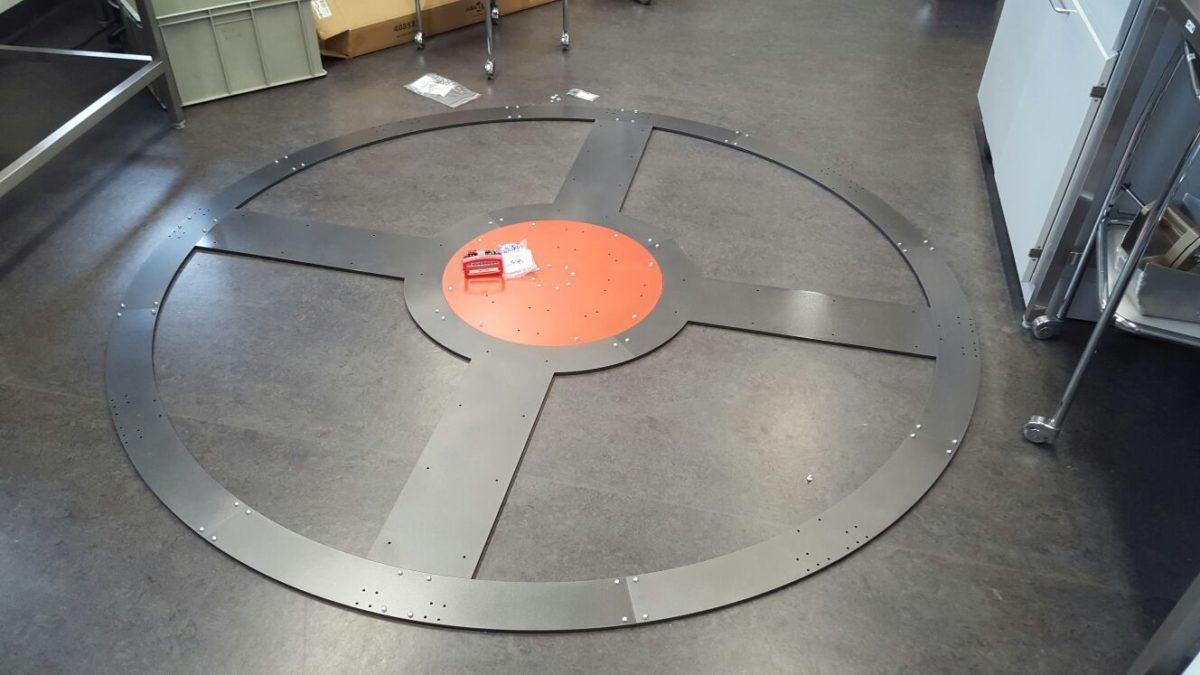 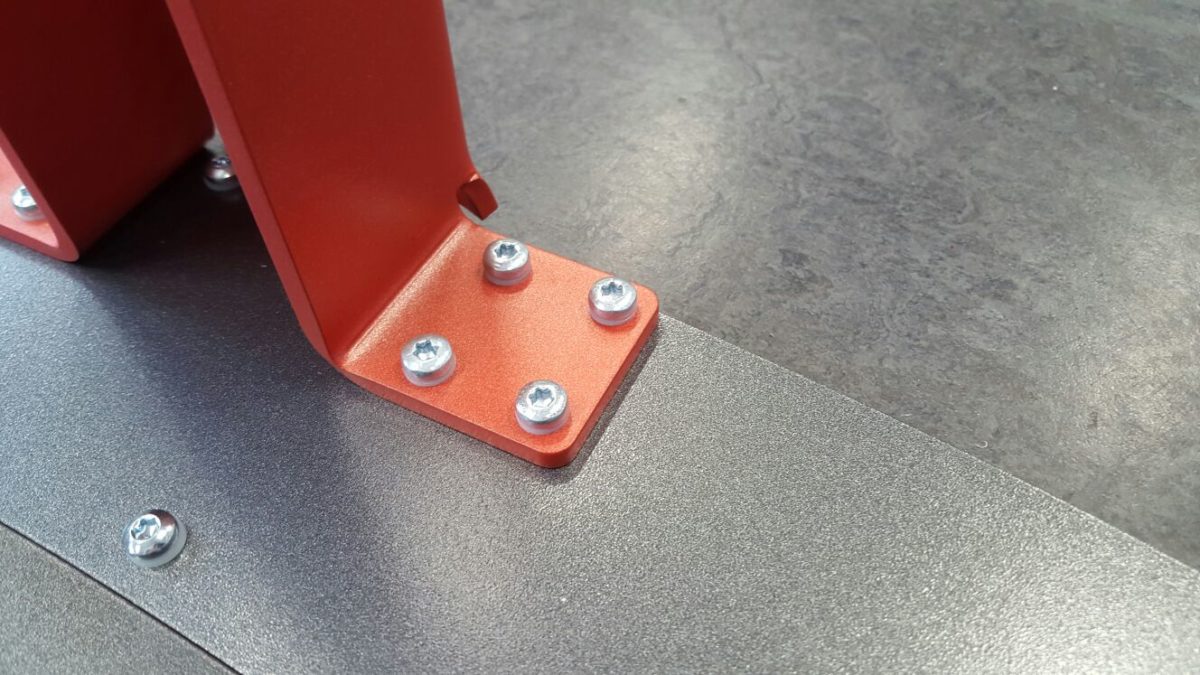 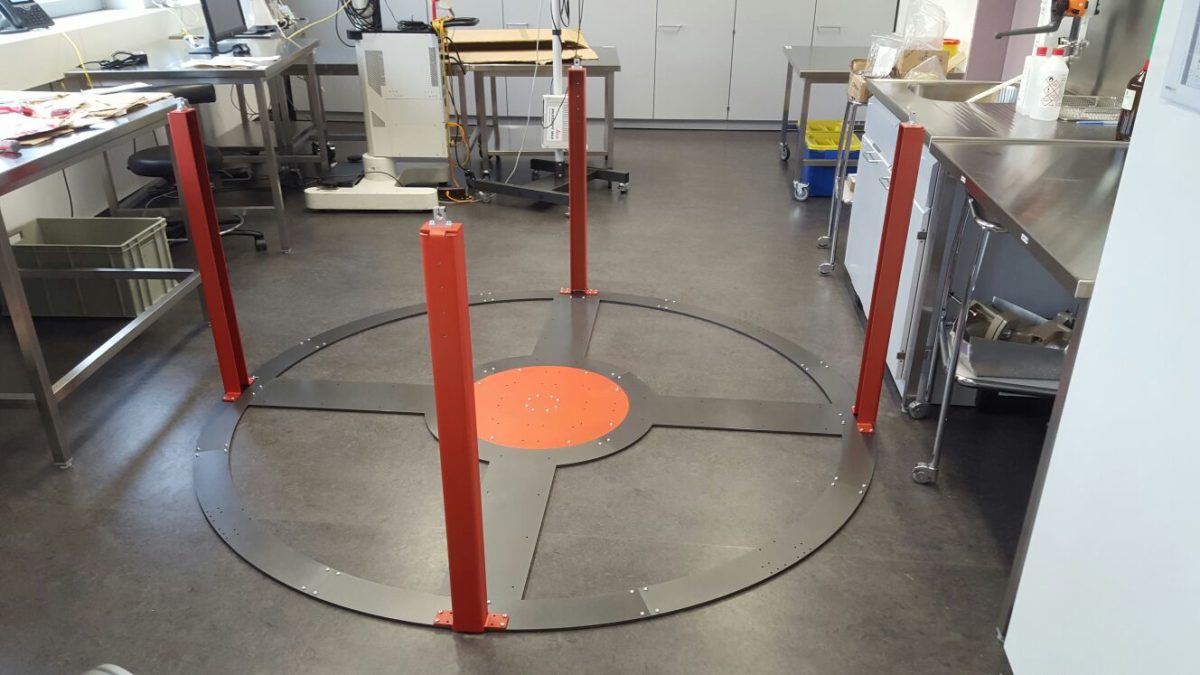 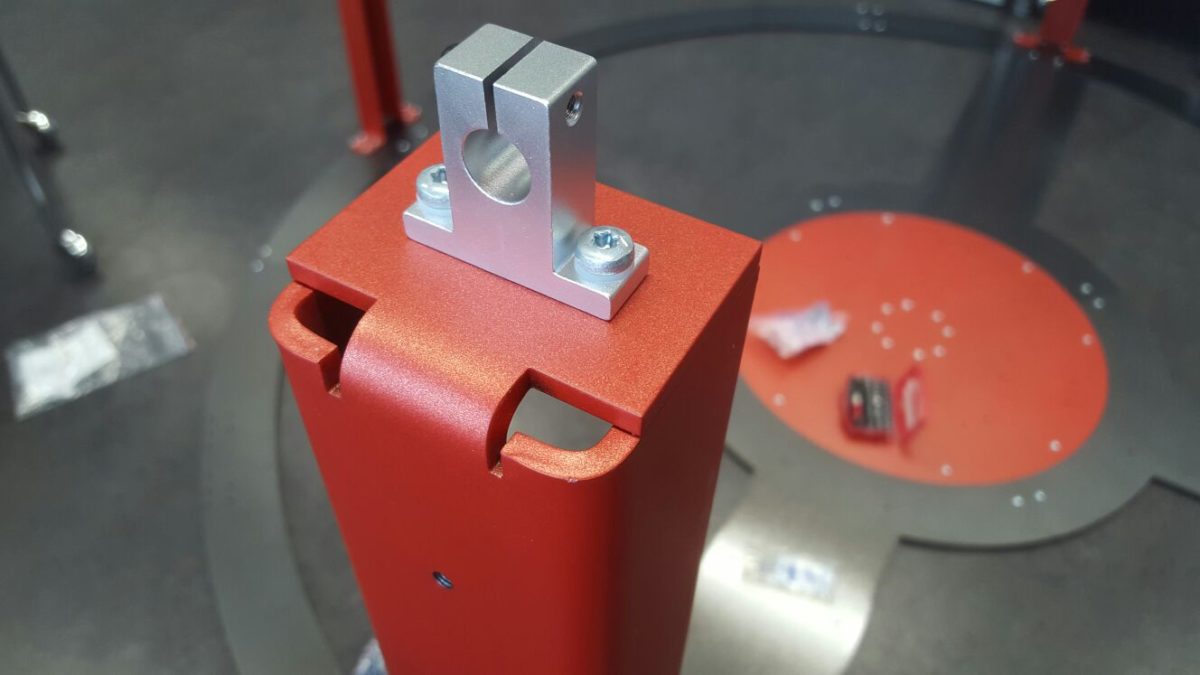 Unfortunately I couldn’t finish since my civil service ended, but I got some pictures that W.Wimmer sent me. 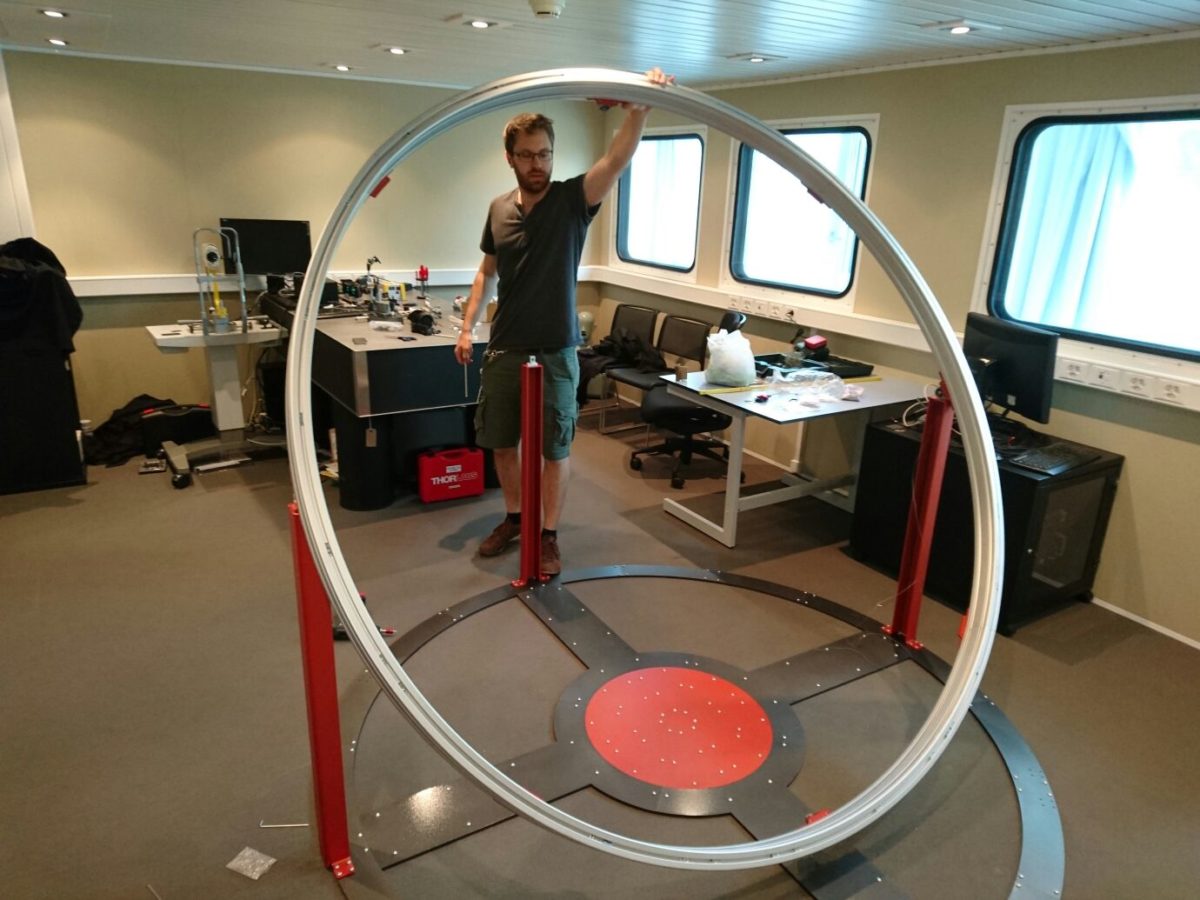 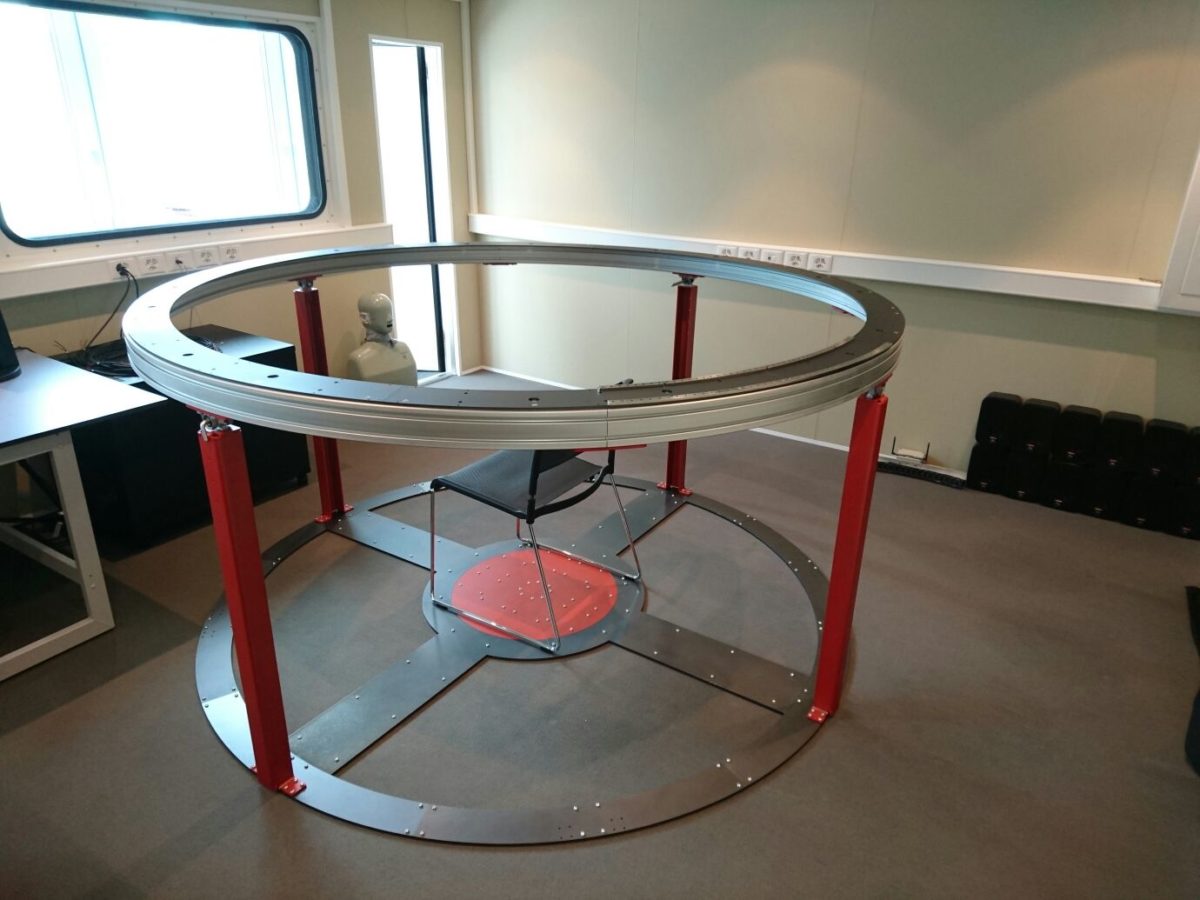 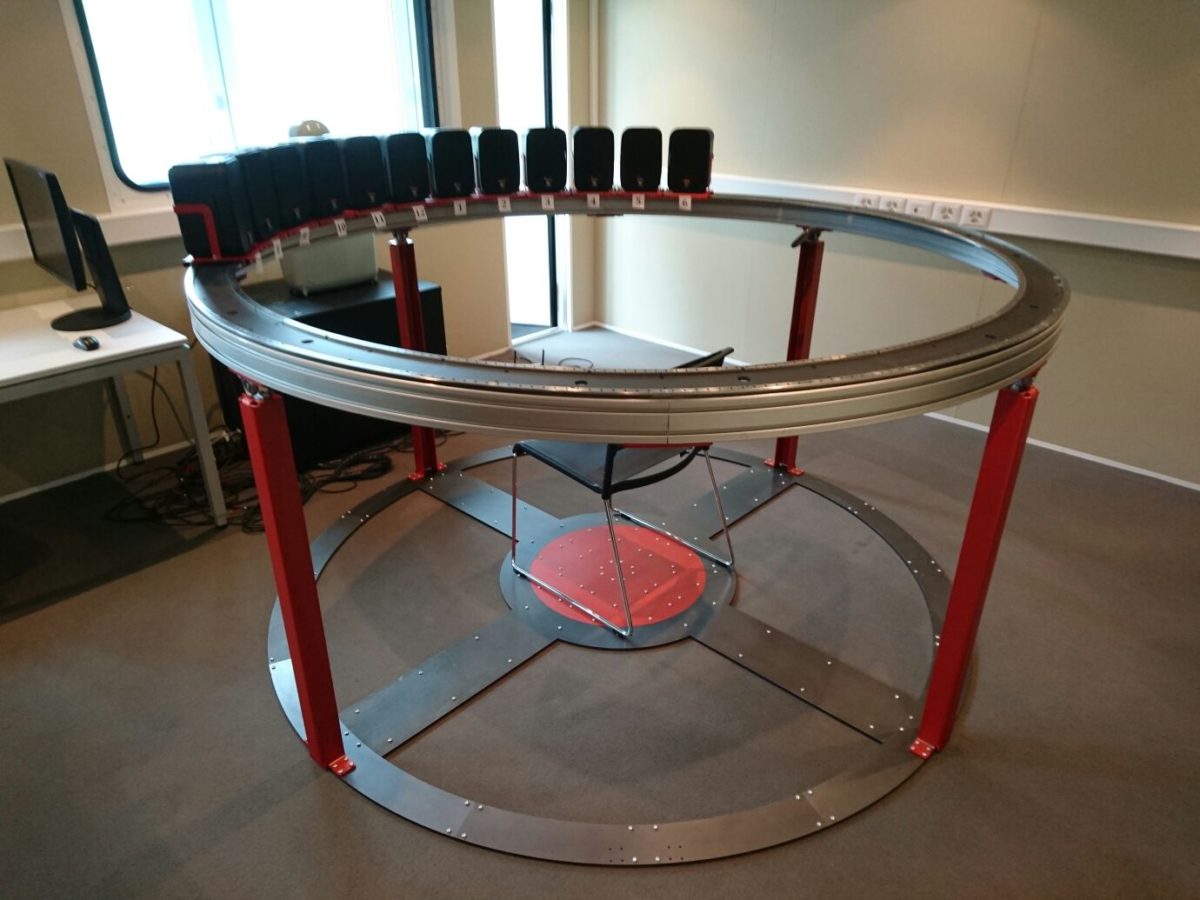 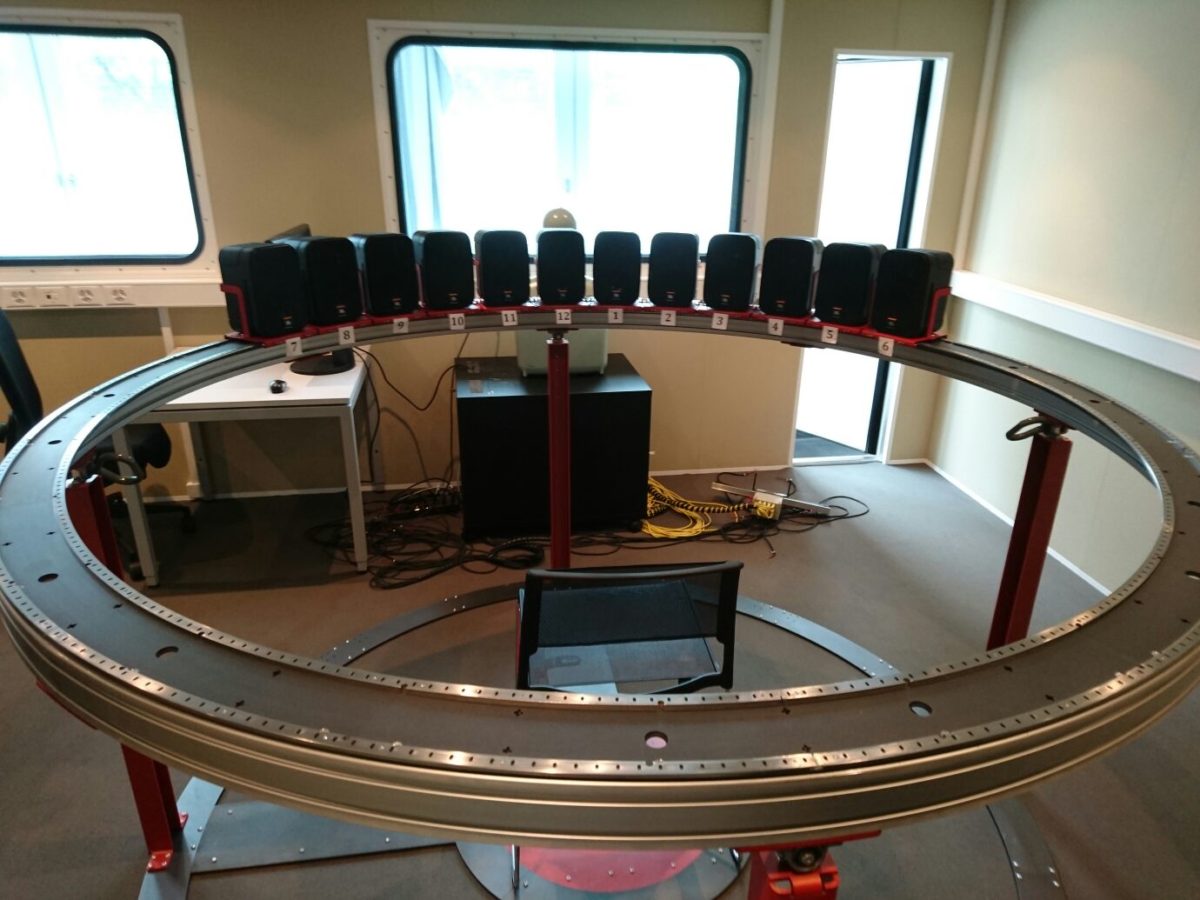 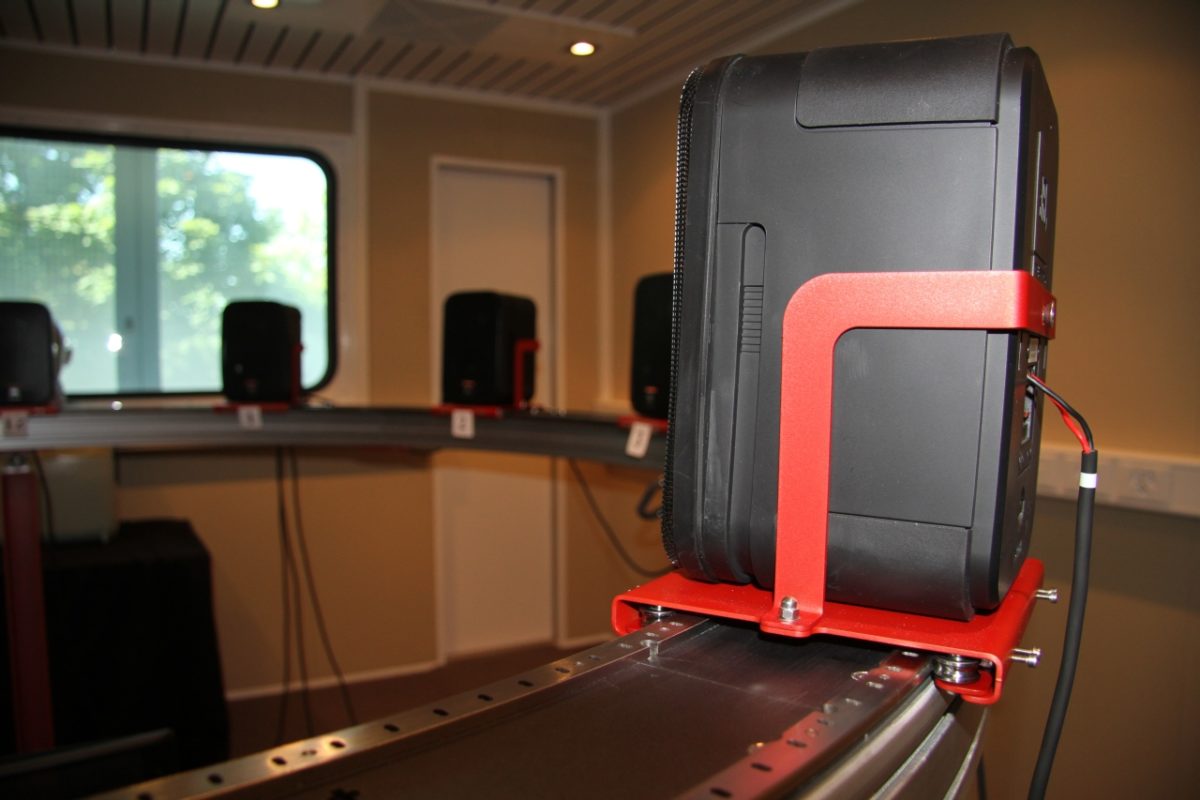 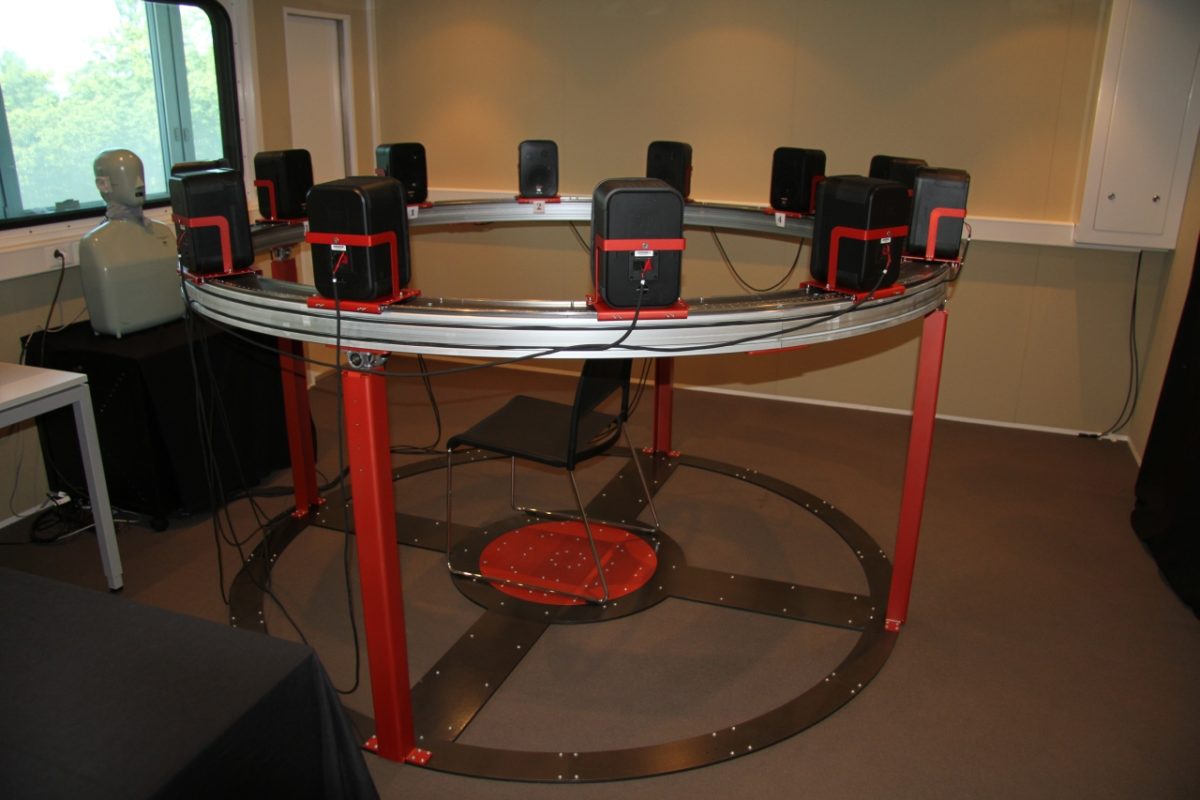 So here’s the semi final product. The loudspeakers are individually moveable but no yet motorized. This will be implemented in the next step but some efforts have already been made.